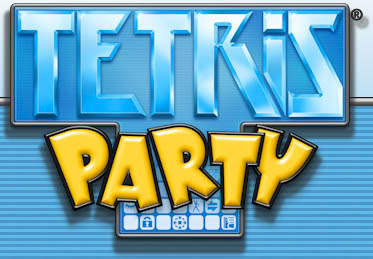 Alongside Pac-Man and the original Super Mario Bros., Tetris is one of those games that if you've ever played a video games, you've likely played it. It started its fame on the original, monochromatic Game Boy. And since then the Russian puzzler has been on pretty much every PC, handheld, console, cell-phone, and other electronic device to date. It's the most famous of puzzle games and the simplest to learn: try to make lines with various shapes. Tetris Party is finally available on WiiWare. Is another Tetris game worth the money? Or are you better sticking with the excellent Game Boy and Nintendo DS versions?

If you buy the game solely for the core Tetris experience. You won't be disappointed. Marathon mode is intact. It's the basic Tetris mode where you clear away lines by matching up seven different shapes, called Tetrominoes, into complete lines. The goal of Marathon mode is to clear 150 lines, thus ending your game and recording your record. But if you turn on Endless, you'll keep playing, regardless of how many lines clear, until you lose. Every 10 lines, the speed increases, making the game more difficult every minute.

Making the game easier is the ghost of each Tetrominoes, a outline that shows exactly where the piece would go directly below it. This can be turned off, for the Tetris purists out there. Holding pieces is another gimmick that cannot be turned off. I found it quite useful, and used it whenever I couldn't find a good place for a piece. But if you're a Tetris purist this can unfortunately not be turned off. If all other modes disappoint you, this one's is a definite winner and my most played. 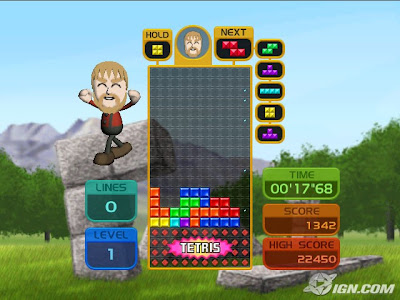 Along with Marathon mode come three other single-player modes: Field Climber, Shadow, and Stage Racer. The first, Field Climber, was my favorite and an ingenius variation on Tetris. Instead of clearing lines, it's your goal to build a staircase for a little man to climb. This little man can only climb a single block at a time and must collect all the flags in the level before making it to the top of the stage. Normal Tetris rules apply, so if you make a complete line or build over the top boundary, expect some nasty results.

As for Shadow, this mode is another fun variation on Tetris. The goal of each level is to fill in the shaded gray area to form some sort of picture (be it an apple, hamburger, or smiley face). Again, normal Tetris rules apply here, so if you accidentally make a complete line, you could screw up your picture. You can hold up to 10 pieces in this mode, and going out of the lines results in a lesser percentile at the end of each level.

The final mode is Stage Racer. In Stage Racer you control a single Tetris piece down a tunnel. You have to watch out for blocks that stick out to trap your piece. And when you get caught in certain situations you'll have to rotate the piece the right way to get out. Later levels get pretty difficult, but out of the three newest modes, this was the most lacking in my opinion.

Also included in Tetris Party is Beginners Tetris. A simplified version of Tetris with bigger blocks and a smaller playing field. While definitely for little kids, it can provide some challenge by cranking up the speed. And please note that since I don't have a Balance Board, I didn't get to try out any of the Balance Board modes and options. 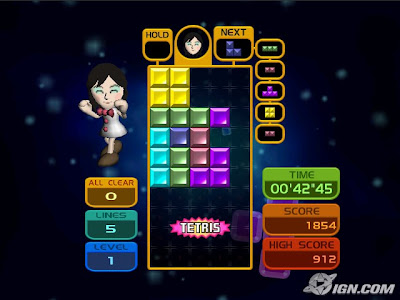 As far as local multiplayer goes, there's a lot to do here. All single player modes, Marathon (dubbed VS Tetris here), Stage Racer, Shadow, and Field Climber can be done in Multiplayer. Plus there's several new modes titled Hot Lines, Duel Spaces, and Co-op Tetris. Hot Lines has you clearing certain lines on the grid before opponents. While Duel Spaces has you trying to enclose more space than opponents. The third mode, Co-op Tetris, is just that: cooperative Tetris. This one's really fun as you have to work together to get the best effect. All the modes are pretty addictive in multiplayer and will have you hooked for hours to come. There's a reason the game is called Tetris Party.

While local multiplayer is awesome. That can't exactly be said for the online multiplayer. Here you can play with either one or five other player(s) in a regular VS Tetris match. That's determined by whether you opt to have items or not. No items? 2-player online. Items? 6-player online. The mode is still fun and records your wins/losses in the same way as Mario Kart Wii and Dr. Mario Online Rx, with 5000 points that either increases or decreases by how much you lose or win by. While it's fun and all, so much more could have been done here. 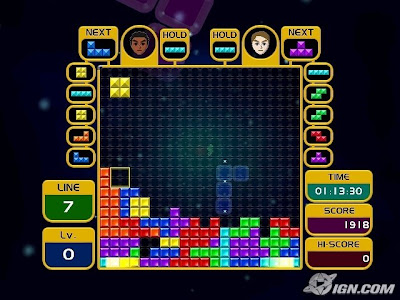 Tetris Party's graphics are minimalist. The backgrounds are cool and the gameplay is colorful enough for a puzzler, but the menus are pretty boring. With only primary and secondary colors and little tabs for each option, the menus won't impress much. The music is good as always. And that addicting Music A is still in there!

There's supposedly 18 different modes throughout the game, and they'll all keep you entertained for a while. While a lot of Tetris games include modes that are unnecessary and boring. Almost all of Tetris Party's modes (except Beginners Tetris, but that's more of a tutorial than anything), are fun and lengthy, at least for a puzzle game. 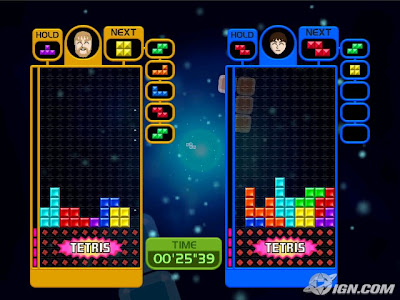 Overall Thoughts
Whether you've come looking for the basic Tetris Marathon mode, local multiplayer, or new Tetris modes, you'll be satisfied. While the graphics may be simplistic and the online lacking, Tetris Party's local play is excellent. This WiiWare title is a must-buy for Tetris fans, puzzle fans, or someone looking for some good Tetris fun, single- or multiplayer, online or off.

Gameplay: 9/10 All the normal Tetris options are here, along with some other great single- and multiplayer modes.

Graphics: 6.5/10 The menus are simple and bland, while the backgrounds and gameplay is a bit better and more visually appealing.

Lasting Value: 8.5/10 All the modes and extras boil down to quite a bit of long lasting fun.

8/10
Comments or questions? Drop an email to kylehogg@gmail.com or leave a comment below...
Posted by Kyle at 2:59 PM