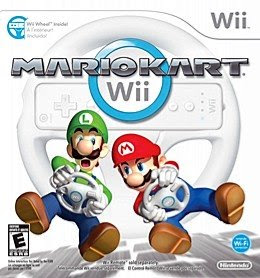 Seeing that both the super popular franchises of Super Smash Bros. and Super Mario have had their turn on the Wii, you may wonder where that other Mario series is... Mario Kart. Well, Mario Kart Wii is here. Is it worthy of the name Mario, or is it more shovelware doomed to the bargain bin?

Mario Kart Wii gets away with basically the some gameplay as all the past karts with a few minor additions. Haven't played since the N64? Not too much should be new. Basically, you choose a Mario character (or Donkey Kong, Diddy Kong, Funky Kong, or your Mii), choose a kart, and race around different Mario themed tracks in several different modes, including single- and multi-player, online and off.

It features 32 tracks in all. I have really come to love the tracks in Mario Kart Wii, especially the original ones. While it still features the super difficult Rainbow Road and Bowser Castles, new tracks such as Koopa Cape, Coconut Mall, and Wario's Gold Mine keep it fresh. Plus, along with the 16 new tracks, there's another 16 retro tracks, including favorites such as Sherbet Land (Nintendo 64), Waluigi Stadium (GameCube), and Delfino Square (Nintendo DS) to race on. Plus, now there's twelve racers on the track, rather than eight as in previous games, which ends up being even more hectic and random than before. And even more luck and randomness is not needed in Mario Kart.

And now not only do you have eight or so karts to choose from, you can also decide to race on motorcycles. Adding bikes to the series was a smart move on Nintendo's part. There's just the right balance between karts and bikes to insure that neither will have an advantage. The difference between the two are pretty noticeable; bikes are just a little bit faster, and can do wheelies, which will increase your speed but you won't really be able to turn. And bikes don't get as much of a boost off a powerslide as karts do. I enjoyed the bikes, but I still prefer karts any day.

There's also a few added items that will make this Mario Kart even more random than previous. The new items include: the POW Block, the Lightning Cloud, and the Mega Mushroom (from New Super Mario Bros.) I really like the Lightning Cloud, because it requires a lot of skill to get the most boost from it. When you get it, it'll speed you up, but if you keep it too long you'll spin out and shrink. The real skill in it is to use it for a boost, then bump into an opponent and give it to them (so they'll get shrunk). The Mega Mushrooms pretty cool too, turning you giant and letting you squish other player. Being my least favorite, I saved the POW Block for last; this item acts like a red shell to everyone in front of the user, spinning them out of control.

As in Smash Bros. there's four different ways to race. The Wii Wheel, Wii Remote and Nunchuk, Classic Controller, and Gamecube. All of the work, but my favorite is definitely the Wii Wheel. When I first heard of Mario Kart using motion controls, my reaction was skeptical. I decided I'd use the Classic Controller because I had recently bought one. But when Smash Bros. came out I got an old WaveBird out, so I decided I'd use that. But when the game came in the mail, I decided to try the motion controls to see if they worked, and I was hooked. Both the GameCube and Classic Controllers work fine, and I'd use one of those if you're into a more old-school style. The Wii Remote and Nunchuk combination also works especially since you get both the analog stick and motion controls for tricks. 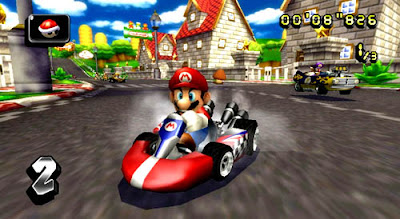 Mario, sporting a snazzy new kart.
Wait, tricks? In a Mario Kart? Yes, folks, Nintendo has added tricks, too. Tricks are easy to pull off and rewarding. When you go off a jump just shake the Wii Wheel, shake the Wii Remote, or press a direction on the D-Pad (depending on which controller you're using) and your character will do a random trick and when you land, you'll get a short speed boost. Tricks are so addicting, I found myself shaking the Wheel wildly every time I got airborne. Like some of the new additions (bikes, etc.) to Mario Kart, tricks are a cool new mechanic but they don't change the game radically.

Another thing I should add is that snaking has been removed. No longer does the boost you gain after a powerslide have to do with you rapidly moving the analog stick back and forth. Now it matters how long you're in the powerslide. It's a dumbing down mechanic, but I feel it's a change for the better.

Just as in Smash Bros., you probably are going to play quite a bit of multiplayer in Mario Kart Wii. Sure, there's the (unfortunately) one-player only Grand Prix which will last you maybe a few days or even a week at most, but then you'll probably turn to multiplayer. Local multiplayer works great and up to four player can play on a single TV. But the real gem here in online multiplayer. Mario Kart Wii has one of the best multiplayer experience for the console. The Wi-Fi connection is pretty fast, Nintendo is actually has a lot of rules that will kick you out of a game (such as driving the course backwards and hit people with shells and stars), and it's actually pretty easy to navigate the slick menus. Another great thing is that two people can play on the same Wii online, further increasing the entertainment value of online play. The system that Nintendo devised for ranking is pretty genius in my opinion. Instead of Wins/Losses, you start out with 5000 points and how many points and whether you lose or gain them is determined by your placing.

Now while the multiplayer works, I have some gripes about it too. My main disappointment with the game is Battle Mode. This was one of the best modes in previous Karts, especially N64 and DS. This time around they limited it a lot. No longer is there every man for himself, and the last man standing wins. Mario Kart Wii, forces you into teams. Plus as in previous Karts you have three balloons which represent your lives. But that's where the similarities end. In previous games once you lost all three you were out of the game and could just watch it. Now when you lose, you're reborn a moment later with three more balloons! The only thing that matters for the team is your score. This definitely will turn a lot of people away from Battle Mode, as it did for me. About the only other bad thing about multiplayer has to do with 2-player online. The second player practically isn't there except in races. He/She will always be dubbed Guest and can't earn any points even if you have another save file on the game. Also if you're playing by yourself and a friend or family comes up and want to play they can't just drop in. You have to quit out of Nintendo Wi-Fi and select it again just with the 2-player option. But other than that, the multiplayer is the best way to go in Mario Kart Wii.

The graphics aren't nearly as good as some of the Wii's other great titles (Mario Galaxy, Metroid Prime 3, etc.), but it has that polished, cartoonish feel of other games such as Wii Sports. And it's pleasing to look at, even if there's not a lot of texture details and it's not too realistic.

Another thing that isn't extraordinary but works is the audio. The music is fun and fast, and it sort of adds to the experience. But the character noise sure get on my nerves. Every time they did a trick, got ahead, or anything else good they make annoying sounds like "Wahoo!", "Alright", and "Yes." Especially certain characters like the Miis, which are by the way are playable and awesome.

Overall, Mario Kart Wii is a great game. And it'll last you a while, especially in the online areas. But it's not for everyone. If you didn't like the other Mario Karts or like more realistic, less random racing like F-Zero, then this isn't for you. But I liked it and what it brought to the Mario Kart table, such as bikes, tricks, Miis, and a great online.

Gameplay: 8.5/10 Very fun, and Miis, tricks, and bikes are great. But the battle mode definitely bumped this score down.

Multiplayer: 9.5/10 Some of the best online on Wii. Local multiplayer is great too.

Sound: 7.5/10 God those Miis are annoying. Nice music though.

Lasting Value: 9/10 Online will keep you coming back for more.