As my first true Virtual Console review (my Super Mario Bros. 3 review was a mess), it's time for some explaining...

About the Virtual Console reviews: I'm not rating these games necessarily by today's standards, otherwise my graphics and lasting value categories would score very low. But I'm also not reviewing these games by their original system's standards. Think of it as a combination of the two and overall just if it's worth a download or not. 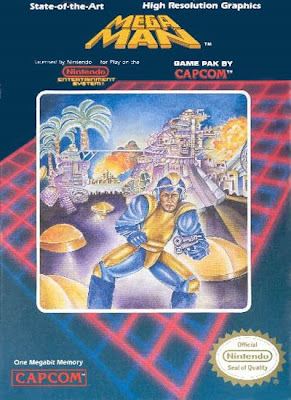 Many of today's popular video game characters and series started on the NES. Mario, Castlevania, Zelda, it all started on the NES. The popular franchise of Mega Man also started on that very same system. Even though Mega Man 2 was the best received, the original Mega Man still serves it's place as it laid down the basis for Mega Man games to come.

The story goes a little something like this: Dr. Wily is evil. He corrupts and reprograms six robots to do his evil deeds. Dr. Light, the original creator of the robots, is disgusted by what Dr. Wily did so he makes Mega Man to fight and defeat Dr. Wily and his six Robot Masters. That's all there is to it, and that's all there really needs to be in a game like this.

Platformers and side-scrollers made up a large portion of games back in those times. Mega Man is still a side-scrolling, platforming game, but what Mega Man did different than those multiple other games was include a whole different mechanic to fighting enemies. Instead of jumping on top of them or punching them, Mega Man shot baddies with his Mega Blaster. You start out with just a Mega Blaster, but a whole part of the game is getting different weapons, which brings me to my next subject... 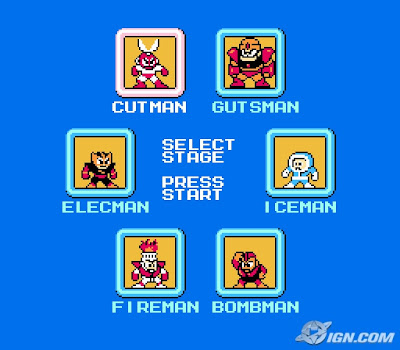 Another thing that differs Mega Man from other games in the 8-bit era is that it isn't entirely linear. I say "isn't entirely" because you still move from left to right to the end of the level. What makes it nonlinear is the fact that you choose the order you complete which stages in. That is until you complete all six, then you're whisked away to Dr. Wily's castle, which does progress linear. In Mega Man there are six different stages. Each ending in a Robot Master. The real strategy in picking the stages is finding out each bosses weakness, since every boss is easily defeated with another Robot Master's weapon. While not as memorable as Mega Man 2's various blasters, Mega Man's different attacks are all pretty useful and each have their different uses. You're free to tackle the game's stages in any order you want, but if you want the easiest and most successful you'll have to discover the various weaknesses of each Robot Master.

Being a classic NES game you can be sure of one thing, it's difficult. Not broken mechanics difficult or over powered AI difficult. But controller-throwing-down difficulty in which you know it's not the game's fault; it's your's and your reflexes'. While it may not appeal to some people, the brutal difficulty is fun and very rewarding in my opinion (which is pretty much what this entire review is, my opinion, so deal with it).

Mega Man's bright array of colors (for a NES game) and detailed 8-bit backgrounds sum up to be a nice looking NES. Again, while Mega Man 2 is known for it's awesome music, the original appearance of the Blue Bomber sports some pretty nice music too. 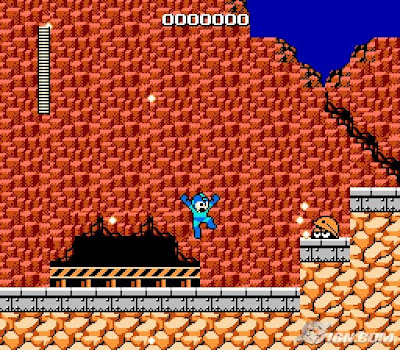 Six bosses and several Dr. Wily stages are what you'll find in Mega Man. Definitely the shortest as far as Mega Man games go, it'll last your a few hours to five at best. But once you're done, you can always speed run or just play through the game again (as you should now know the best pattern to defeating the bosses).

Overall Thoughts
Gameplay: 9/10 Classic Mega Man, just as you remember. The rock-paper-scissors formula of progression is just as unique today as it was in the 80's. The game's a blast, end of story.

Sound: 9/10 While not as memorable as the sequals, expect some nice tunes overall.

Lasting Value: 7/10 The first Mega Man's the shortest of the bunch.

8/10
Mega Man's first outing is still one of the best. Plus, with a price of 500 Wii Points, equal to $5, I recommend this to any fan of Mega Man or for someone looking for some plain, old-school fun.
Posted by Kyle at 3:22 AM