Why Wario Land: Shake It! will still sell, despite no advertising 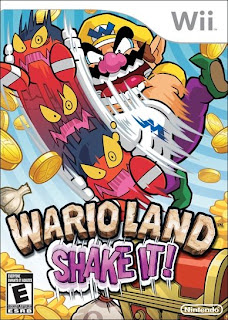 Wii games in general, get very little advertising via TV and magazines. There are some exceptions (i.e. Boom Blox, Mushroom Men). But with the Wii, the only games that really get any commercials are Nintendo first-party games like Super Smash and Mario games. And who can forget those "Wii Would Like To Play" Nintendo commercials.

But one particular game that was an awesome game, got very little advertising from Nintendo (even though it was a first-party game), and in turn didn't sell great was Metroid Prime 3: Corruption. A disappointment, as the game was real fun and one of the best for the Wii.

And now, with Wario Land: Shake It! about to be released in a few weeks, Nintendo seems to have "pulled another Metroid Prime 3". But I'm not worrying about it selling bad for namely three reasons.

Number one, Wario is a lot more popular than Metroids and Samus. When the casual folk (excuse me... expanded audience) hear the word "Wario", they might have a clue what you're talking about or what they're seeing. His appearance in the best selling Super Smash Bros. Brawl only increases his popularity more. So while the casuals may know a bit about Wario (since he is a Mario character), most people don't know too much about Metroid and the Metroid story.

Number two, kids will be drawn to Wario Land's art style and humor a lot more than MP3. Don't get me wrong, I love Metroid's graphics and style, but I'm also equally impressed with Wario's hand drawn style. And I think a cartoon art direction will appeal to kids more than a more realistic graphics of Corruption. 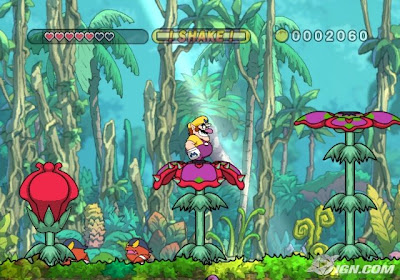 An example of Wario Land's art...
Number three, the core will pick it up too. As long as it gets good reviews from popular magazines and websites, the core audience will probably buy it, boosting up those sales even more. I know I am.

That rounds it up for me. What about you? Think Wario Land will sell? Tell me in the comments.
Posted by Kyle at 5:12 PM