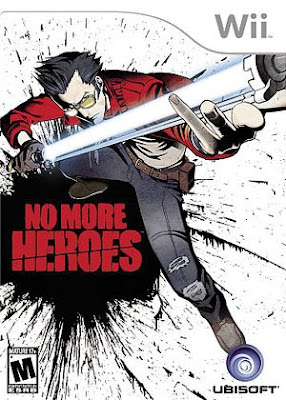 Suda51, director and writer of No More Heroes, has been behind quite a few crazy games, most notably killer7 for the GameCube. More recently he helped bring Fatal Frame IV out to the Wii in Japan. No More Heroes is quite possibly his craziest game yet. But does crazy equal quality?

In No More Heroes, you're an lucha libre-loving, otaku punk named Travis Touchdown. He lives, near broke, in a small hotel room in a fictional, Californian city named Santa Destroy with his cat Jeane. He meets a pretty girl, named Sylvia Christe, in a bar one night. She offers him the job of an assassin for the United Assassin's Association, or the UAA. He's tasked of killing the top eleven assassin and become number one. The story's actually very good, the characters very insane and awesome, and there's a good enough number of twists (mostly near the climax) that you'll want to stick with it to the end.

Another thing that needs to be noted is the assortment of amazing characters that Suda51 created in the game. From the bosses and villains to the store clerks and gym masters, there are some awesome characters to be found. There's psychopaths like Travis himself and less crazy yet still weird people like Destroyman, a postman who dresses up like a superhero to duke it out with you. If you're looking for a wonderfully zany cast of characters, No More Heroes will certainly satisfy.

The gameplay is broken up into two different sections: boss battles and open world. The former is where the game shines. You enter the bosses level at some checkpoint throughout Santa Destroy, from there you have to dispatch room after room of goons until you reach the highly memorable and difficult boss battle. You'll usually be fighting upwards of eight to ten enemies per room. It's a pretty standard, linear fare. You kill all the enemies in room. Door opens to next room. Repeat until at boss. But it's still really entertaining. Plus there's variations in certain levels, such as having to run over enemies on your bike or use the remote Wii Sports-style as a bat and hit a ball through a line of enemies.

It can get a bit repetitive and feel like a chore. But once your reach the boss battle at the end of each, you realize it's definitely worth it. The boss battles are definitely the highlight of the game. Each one will challenge both your skill and your determination. Plus every one is drastically different from the last. If there's one thing that No More Heroes does the best, it's the boss battles.

While the boss battles are entertaining and memorable, what about the other part of the game: the open world between each battle? Is it as good? Not exactly. Santa Destroy isn't really that great of a city. There's very little to do without stepping onto icons to start up missions. Nothing like GTA or anything. Outside of missions, all there really is to do is ride your bike around. The controls of your bike take some time to learn, but it entertains a bit. That being said, there's nothing to do on your bike either, except just ride around. Any pedestrians or cars are practically moving props. Cars will actually stop if you stand in front of them and just wait for you to move. No honking, no yelling, no lifelikeness at all. And the most fun you can have with pedestrians is run them over, which gets old quick, since you can't talk to or interact with them in any other way.

Since there's not much to do in the open world, it's pretty much a hub. But instead of being a good hub world (like Super Mario Galaxy's), it's way to open. With far distances between each place you need to go, it does feel lacking. But in the world there are several shops (such as a clothes store, a video store for learning new moves, and a gym for working out), your motel room (where you can save, change clothes, watch videos, or play with your cat) and two places to earn money.

The first is where you'll gain part time jobs, which are unlocked after beating bosses. These include working at a gas station, picking up trash, rescuing kittens, killing scorpions, and mowing lawns. Do good in these and you'll unlock assassination missions. These missions can be accessed through the second mentioned building, the UAA assignment building. The missions that you can take range from killing the head of a pizza joint to killing as many goons as you can in a set time. Besides these missions you get from the UAA, driving around on your bike you may notice several other assassination missions you can undertake while away from the head offices of the UAA.

But even if the part-time jobs and assassination missions are entertaining, they are lacking to. Mainly they're lacking a retry option. Say that either you failed a mission, or you want to redo a mission because it earned you some big money... Once back in the open world, he mission icon is gone, so you can't restart a mission. So you have to hop on your bike and head back to open up another mission, and it's a major annoyance.

In an action game like No More Heroes, where a big portion of your time is spent fighting hordes of enemies, room after room, the combat either makes or breaks the game. In NMH's case, the combat is super entertaining and super stylized. It's some of the best fun I've had in a while. Basic combat is a mix of your laser sword moves, which can be upgraded later in the game, and lucha libre wrestling techniques, which you learn more of as you progress.

Mostly though, you'll attack with your beam sword (think lightsaber ripoff). Attacking with it is mapped to the A button. No Zelda-sword-swinging-gestures in this one. Generally, you'll button mash the A button until the enemies life is down to almost zero, then the screen turns gray and action stops. A pixalated arrow appears, prompting you to gesture in a certain way finishing the enemy off. The position of the Wii remote, whether it's pointing up or down when you're mashing the A button, determines whether the attack is high or low. Some enemies and bosses guard especially to on position, so you'll have to change it up to get the best results.

But the combat options don't end there. If you hold the A button, your laser sword starts the glow and shake; when you release the button a powerful attack is unleashed. Again, whether it's a high or low attack determines the outcome. But wait! The combat doesn't stop there! If you happen to lock blades with another sword-, crowbar-, or baseball bat-wielding enemy, a Wii remote appears on screen and circling it are a bunch of giant pixels. This prompts you to move the Wii remote in circles as fast as you can. If you win the blade lock, you'll get a chance at a finishing move right then and there. Using the laser sword too often results in the loss of battery. When this happens you'll have to press 1 and waggle the Wii remote back and forth as fast as possible to recharge it. This adds even more depth to the combat as you'll have to charge it in strategic places. Every time you kill an enemy, three slot machine icons appear. If they match up you get a super-powerful ability called a Dark Side move, which will devastate the battlefield with huge attacks and slow-mo finishers.

Another part of the combat is the wrestling moves. Pulling these of are a lot like finishers with the laser sword. To activate them you have to stun an enemy with a kick or punch with the B button, which doesn't always work, especially when the enemy guards against high or low attacks. When an enemy's stunned, little stars will circle their head. This is the time to press B again and start up a wrestling moves. Two pixelated arrows prompt you to move the remote and Nunchuk in certain directions. These do a sizable amount of damage and are especially useful when fighting bosses. No More Heroes combat is a whole lot of fun and is something every gamer needs to experience.

Just like the combat and story are out of this world and awesome, so is the game's style. NMH is filled to the brim with style and personality. The game's cel-shaded and in your face. For crying out loud, to save, you have to find a toilet so Travis can take a dump! That's how wacky this game is. The game has a huge retro feel, with tons of things like menus and the HUD make up of over sized pixel blocks. Whenever you pull a Dark Side move, instead of a countdown time or load bar, a pixelated tiger walking towards a finish flag shows how much time you have left with that move. It's crazy things like that that make the game's visuals so memorable. Even if the game's style is enjoyable, the graphics are lacking in some areas. Especially in the open world where frequent pop-up and lack of textures are noticeable. That being said, I still really enjoyed the game's style.

The game has a ton of pop culture references, especially from media like Star Wars, with a famous quote (yes that quote) and the lightsaber-esque sword. As for music, what there is original and very enjoyable. I said "what there is" because there's not a whole lot of variety in the game's soundtrack, which is disappointing.

As for lasting value, the game will probably last you upwards of fifteen hours. There's not a whole lot to do once you've completed the main game. You can collect T-shirts and Lovikov balls which can be exchanged with a drunk Russian for new abilities, but that's about it. The game starts off with two difficulties, Sweet and Mild, Mild being the harder of the two. But once you beat the game on either difficulty, you unlock the Bitter setting, which is pretty dang challenging.

Overall Thoughts
No More Heroes is pretty long game with a whole lot of personality and graphical style. The high points of the game, the awesome boss battles and entertaining combat, more than make up for the game's low points, most notably the lack of graphical polish and poor open world. I'd recommend a buy to almost anyone who loves action, are "allowed" to play M-rated games, and wants a solid twelve to fifteen hour experience.

8/10
Comments or questions? Drop an email to kylehogg@gmail.com or leave a comment below...
Posted by Kyle at 8:16 AM