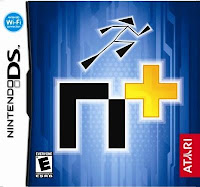 N started as a flash game many years ago that soon gained a cult following. It was a great platformer that used a bare, minimalist visual style and a deep physics engine to its advantage. A console version, available for download as an Xbox Live Arcade game, was released early 2008 titled N+ and was positively received by reviewers and critics alike. Later into the year, portable versions of N+ were released. Now, I've put many hours into the hundreds of levels and beaten the game entirely. Does the DS version live up the the great legacy of N, or does it fall short to its untimely death?

The premise of N+ is simple. You are a ninja. You must get to the door at the end of each level by running, jumping, and dodging enemies and obstacles. You must not die or have time run out. Collect gold along the way to boost your time limit. It's that simple. And it's exactly this that made both N and N+ for the Xbox so appealing. Like many games, it's simple but very addictive. The game definitely hearken back to the simple sidescrolling platforms of days past. Not having a unnecessary story that stretches out for long parts of the game or tons of gimmicks to make it "fresh" really work to N+'s advantage.

N+'s main single-player mode is split into a number of episodes, each containing five levels. The total number of episodes is around 45, which results in more than 200 levels on the cartridge. Each level has one overall goal, get to the door at the end. It's what happens between that makes each vary from the last. Some rooms are filled with enemies to dodge. Others are completely void of bad guys that really test your reflexes with tough, bomb-dodging platforming. While others consist of hitting certain switches that open doors to other switches that add an almost puzzle aspects to some portions of the game. In the hundreds of levels, variety is present and very much welcome.

Other than the basic single-player modes, there's multiplayer, both cooperative and competitive, and level creation options. It's the level creator that is really interesting. It may not be of LittleBigPlanet caliber, but I still had some great fun making great levels, (including a slightly challenging "World 1-1" stage). All the options are there, and it's entirely possible to make every level already in the game. With those kinds of tools, you can make some truly great levels. And while it may have all the tools and options to make any kind of level you want, it's entirely accessible and I grasped the concept a mere five minutes after starting up the mode. Though it would've been nice to have some sort of level editor tutorial mode. Even better there's a great online sharing community to share and download custom made stages.

The game will last you a reasonable time. There are hundreds of levels to tackle and other modes like the level creator and multiplayer. Plus some of the later levels are astonishingly difficult that'll have you playing a single stage over and over for even a half an hour at a time. You'll get a lot of bang for your buck with N+ as it's definitely not a short-lived game.

N+'s gameplay is still very much like the beloved N. The ninja controls precisely, making quick, reflex-heavy platforming possible. The great physics engine is intact as well. Though if you have played the original N, you'll notice your ninja controls a bit heavier and your jumps don't have the distance they used to (though they are still pretty big). It's still a blast to play N+ as the platforming is really good. It's precise, quick, and responsive.

The whole catch in N+ is there's no lives, no health meter, and you have infinite retries on levels. It may seem easy with all these restrictions gone, but really it's anything but. One hit from anything, an enemy, bombs, or falling too far will result in your death. It's this that makes the game so difficult. Some of the later levels are almost brutal in just how much they test your reflexes. But the rewarding feeling that comes from completion of these punishing stages is second to none.

In N, you had a full view of the entire room. You saw every obstacle, every enemy, and could plan a safe route to the doorway at the end. What the DS does is even better in my opinion. The top screen shows a view of the entire room, much like the original just fitted onto a small screen. While the bottom screen shows a zoomed in version of your ninja. This results in some skillful use of both. Using the up close screen to make your jumps precise and dodge enemies by mere pixel-distances, all the while using the top screen as guide in progressing the level as a whole. It's a great take on N that really couldn't be done on anything but the DS.

N+'s presentation is much like the original: basic. Menus are bland and the graphics use a very minimal approach. Though it may be simple and not pushing the hardware, it's still very nice to look at. You also have the options of switching between the new updated graphics with more detailed sprites and animations (appropriately titled Plus Mode) and the old, primitive graphics of the original N (deemed Pure Mode). While the graphics may be simple but bearable, the music is horrid. There are some flat-out bad tunes in there. I'd recommend just turning off the music, which is thankfully an option since the sound effects are great. The effects of beeping robots and the clinking of obtaining gold are very pleasant on the ears.

Overall Thoughts
N+ is the perfect portable game. You can pick it up and play it for five minutes alone, beating one episode, and then put it down. Or you can play hours on end trying to beat every last stage. It may not be anything particularly new, but it succeeds with some great platforming fun. Bare presentation complaints aside, N+ is a great DS game and a fantastic platformer.

8/10
Comments or questions? Drop an email to kylehogg@gmail.com or leave a comment below...
Posted by Kyle at 8:04 AM