Another short article. I think I may start posting a lot more of these with a larger feature or review here and there, rather than empty, post-less weeks.

Just today we got the first details of Red Steel 2. The original was a fairly huge game in terms of hype, as it took advantage both of the Wii's major innovations: IR pointer controls and motion controls. Unfortunately it failed to live up to these standards with clunky controls and overall unenjoyable gameplay. While it (mostly) bombed with critics, it went on to sell over a million copies. But now that the Wii's been out for over two years... enter Red Steel 2! 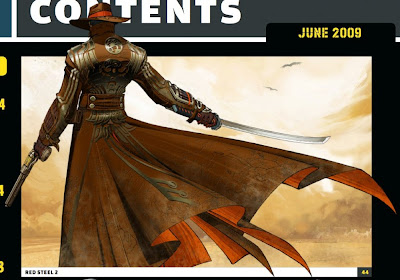 Katana-wielding cowboys and a cel-shaded art style? Count me in!
While we haven't gained much information about it from the two preview pictures of the next issue of Nintendo Power, there's been enough to have me fairly excited. For one, the pictures show a dude with a cowboy hat, a revolver, and a samurai sword. Wild-west meets oriental east is a combination not seen in a lot of things, whether it's movies, video games, or anything else. It's a very unique concept that is appealing much like ninjas vs. pirates.

The issue also reconfirms MotionPlus, which fits perfect with this game and its precision based sword combat. Also you may notice the cel-shaded art style seen on the cover; whether this is just concept art and not in game graphics is yet to be seen, but I hope these are the actual graphics, for it has the potential of looking very great stylistically!

All in all, I hope that the added benefits of Wii MotionPlus and not having to be rushed out for a launch title, Red Steel 2 can end up being a great game and everything its prequel should have been. But I also hope that Ubisoft doesn't hurry to get it out as one of the first Wii MotionPlus titles, dooming it like they did with the first. I'm remaining optimistic at this point, but only time will tell how the game really turns out.