Another short article. Was planning on doing this earlier but didn't have the time. Oh, and just thought I should mention, there's going to be a few changes around here at World 1-1, some minor, others major. Look out for those.

Pokemon Gold and Silver are no doubt my favorite of the core Pokemon RPG's. So when I heard the rumors of a G/S remake on the DS, I was all for it. Supposedly in Japan there's a popular TV show called Pokemon Sunday, and last Sunday's episode said there'd be big news in the next episode. Two confetti balls, one gold, the other silver, hung above the stage during the show pointing to a Gold and Silver remake announcement. 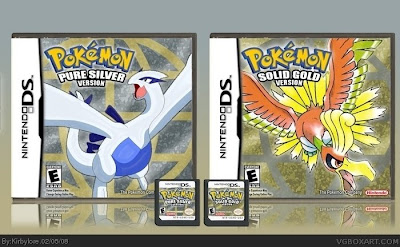 These supposedly "leaked" boxarts found at vgboxart.com may be closer to reality than you think
I really hope that's what this is. Gold and Silver were damn good games and my favorite Pokemon games. You have to give credit where credit's due, since Red and Blue were great games that started the franchise. But we got FireRed and LeafGreen, now it's time for a DS Gold/Silver remake. The classic duo were the perfect Pokemon sequel. They added tons of new features such as a day/night system, 100 new Pokemon, an actually interesting and dynamic story (at least for a Pokemon game), and a Pokeball growing scenario with strategic "seeds" and new creative Pokeball types.

The remakes would be a great idea in my eyes. Update the graphics, include features of Diamond/Pearl/Platinum, such as online play and touch screen support, change up minor things in the original, and add new areas to explore. LeafGreen/FireRed were good fun just playing through the original games with updated visuals and battle systems, but it was equally fun to explore the new Sevii islands with Pokemon from later games and a new side quest. Only time will tell if Gold and Silver really are being remade. But I really hope the games get remade, and I'm willing to bet they will sometime in the not too distant future.

EDIT: It seems the rumors are true: Pokemon Heart Gold and Soul Silver were announced today. This is fantastic news, as I've explained in this post. My main wishes are that they beef up the Kanto portions of the game, as in the original G/S/C they were pretty half assed. And I also hope they add some new areas to explore (Orange Islands anyone?) This has now become one of my most anticipated games, even with the little we know.