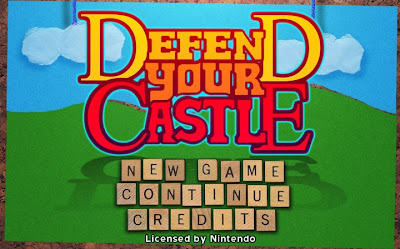 Defend Your Castle started it's fame in the flash games industry (if there even is one). It was a fun, stick figure game that included blood. Well, Defend Your Castle is here on WiiWare; it does away with the gore and blood and adds a unique and loveable style to the game. At only $5, the game seems a bargain, but is it?

To start if off, Defend Your Castle is a unique game experience. Period. The premise is picking up little stick figures who run at your castle and fling them away. They'll fly in the air and land with a "Ahhh!" If they get to your castle, they'll start pounding on the castle walls with their bare fists (or stick figure arm stubs). Simple and addicting, that really seems all there is too it.

At least that's pretty much all there is to it in the first levels. Then more and more enemies start bombarding your castle. Different enemy types appear, such as giants and kamikaze style bomb men. With the points you earn you can buy upgrades such as other defense to your castle. Soon there'll be all kinds of explosions and noise across the screen. It's mad, and it's very fun!

The enemies are somewhat complex, but basic enough. The main guys you'll have to worry about, at least for the first 15 or so levels, are the basic, run of the mill stick figures. They'll run towards the castle, you'll pick them up, and you'll fling them away. Then, there's the battering ram guys, who are actually holding Popsicle sticks. They'll do a little bit more damage to your castle but move slower, making them easier targets. Later on into the game giants will appear. Their heads are made of bottle caps, and they sure are a pain in the ass. If they get to your castle they do some reasonable damage. They're heavy enough (I'm guessing) that you can't pick them up. The only way to defeat them is to click on them several times, which gets a little frustrating but presents a challenge. The last enemy I should mention is probably the easiest to deal with. They're little bomb men, rolling a pop cap gun thing (sorry for the loss of words). All you do is click on them and they explode. The real trick here is to let them get near some of the other enemies (e.g. the giants) and blow them up, killing the other guys too. 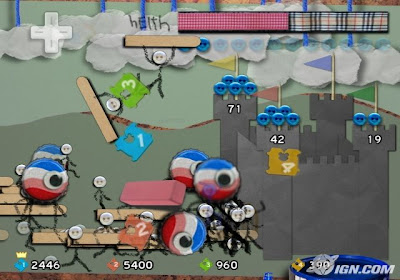 An example of the craziness of Defend Your Castle.
Besides just picking up and flinging, you'll be able to buy other forms of defense for your castle. First and foremost you need to purchase the Pit of Conversion (basically a bucket of paint), which will convert bad guys that you place in it onto your side. What do you do with these guys? You can use them as archers, wizards, bomb men, and repair men. The archers are pretty self explainatory and really get helpful the further you get into the game. It's the bomb men that you'll really notice their help. They run out towards the oncoming hordes and when you click on them, they explode. It's suicide, but it's an easy way to take out those pesky giants. The magic users of the castle can cast several spells, such as erasing an enemy or converting them without the Pit. And rounding it off are the castle builders. You won't really notice them being there. They kind of work behind the scenes; the more you have of them, the faster your castle health restores itself. While you have certain defenses, it will mostly come down to your reflexes and boy is it addicting.

The multiplayer in Defend Your Castle is nicely integrated into the game. With simple 4-player drop-in/drop-out mechanics, you'll have your friends joining with ease. And let me tell you, it definitely is helpful to have another hand when you get around level 30 or so. Plus if you want to try Heroic mode, you'll be facing tons upon tons of enemies from the very start. Another great addition for people who need a little more challenge (but trust me, it's very hard,).

While some may argue the graphics are intentionally bad, they're still bad. Nonetheless, they still have a lot of charm. Everything in the game looks like it was made in a kindergarten art class. The stick figures are rudely drawn, your castle's made of construction paper, and the clouds are hung up with classroom yarn. It's not the greatest graphics, but they're definitely cool. 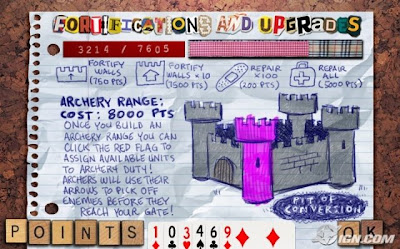 The upgrade system.
Just as the graphics were very "homemade", so is the sound. Every sound from the cries of the dying enemies to the explosions are done by some guy. You and me could probably make the same sounds, and similar to the graphics there is some charm to Defend Your Castles' audio.

If you're good enough at it, the game will last you forever. But number one, you may falter and somehow lose the game. Number two, you will get bored after a while. Sure, having a couple friends over can definitely make it more fun, but it will grow old. Plus, you could try heroic mode and see how far you get in it.

Overall, it's quite a deal for $5. It's really a great and original game that I'd recommend to almost anyone. But if it doesn't appeal to you, I'd try out the flash game one first, and who know? Maybe you'll be satisfied with just that.

Gameplay: 8/10 Simple, brilliant, and addicting. While it does get repetitive, it will keep you entertained for some time.

Multiplayer: 7.5/10 The drop-in/drop-out mechanic is great and accessible.

Graphics: 5.5/10 You could tell they made them bad on purpose, but still they're kind of funny.

Sound: 7/10 Though music is pretty much nonexistent, the effects are charmingly hilarious.

Lasting Value: 7.5/10 It will grow old, but the multiplayer definitely livens it up.

7/10
Defend Your Castle goes way beyond what happened in the original. Aspects such as the style and the 4-player multiplayer vastly improve what was in the flash game. As a bonus it's only $5 and that really is perfect for this game. A great launch title and a great game in general, if you have the Wii Points (and not to mention the room in your "fridge"), pick this one up.

Comments or questions? Drop an email to kylehogg@gmail.com or leave a comment below...
Posted by Kyle at 2:00 PM