Sorry about the late review guys. By the way, I've decided to shorten my review a bit. You may not notice but compared to my first review (Mario Kart Wii), this one is quite a bit shorter. Don't know if I'll continue the short reviews, but I just couldn't think of much for this game. Enjoy! 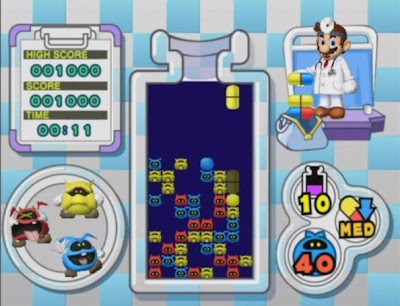 Dr. Mario is a classic puzzler that has gained many fans over the years. Originally released on the NES and remade on the SNES (packaged with Tetris), the games have been around for a while. The newest versions updates the gameplay with minor additions such as Mii-support, online multiplayer, and Virus Buster.

Dr. Mario Online Rx is really two games in one. It's both classic Dr. Mario from the NES age and a variation of the original called Virus Buster, which originated as a minigame in Brain Age 2 for the Nintendo DS. Both are pretty fun, but I feel the Dr. Mario game is the better of the two.

The Dr. Mario part of the game isn't anything new. But it's good that way. It's still the classic, line up four of the same colors and get rid of all the viruses. It offers both Classic and Flash modes. The real gem here is online multiplayer. Both Classic and Flash are available there, and it's a blast. The online incorporates Mario Kart Wii's ranking system. You start out with 5000 points and lose/gain them according to who you beat. It works fine, and I really hope Nintendo keep this system for later games down the road. As a bonus there's text chat online! No, not actual chatting. There are several predetermined phrases such as "Good game," "Go easy on me," and "Think you can beat me?!". Cheesy? Definitely. Get the job done? Yes. The online is really the greatest part of the game and keeps me coming back for more.

Now as for Virus Buster, it's an interesting variation of the original Dr. Mario gameplay. Instead of using the D-Pad to move the descending pill, you move the pills around via Wii Remote cursor. While it may seem a minor addition, there's more! Besides the 4-player co-op, there's a new gameplay mechanic too: any falling blocks that result from a previous line you can actually grab onto and move. If you haven't played the original you may not know what I'm talking about, but it's a radical change that can be used with a lot of strategy. That being said, Virus Buster is best played in multiplayer. Where as one of the players can line up the colors and the other move the falling pieces into place. You may not understand what I'm saying but you'll know what I'm talking about once to play it. Up to four players can join in, but I found two works the best. 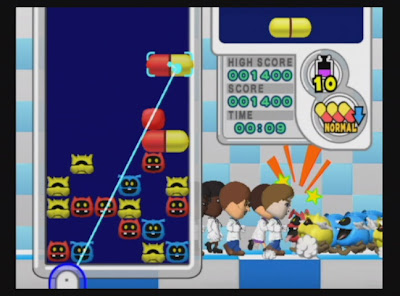 Virus Buster in action.
As for the graphics, let's just say they're mediocre. Everything is 2-D, but it's pleasing to the eyes. No jaw dropping achievements but nothing noticeably wrong such as frame rate issues. Another cool little addition to the game are Miis. Now not only Mario throws your pills out for you, but your cute (or maybe ugly) avatars can do it too! Unnecessary but nice!

The audio in the WiiWare game is pretty much all the classic tunes. Favorites such as Fever and Chill return. The music goes along with the frenzy of the game well. They're enjoyable but some are on the verge of annoying. But most likely, you'll hum along in some parts.

Dr. Mario Online Rx will keep you coming back for more. Of all the WiiWare games out currently, I believe this is the most you can get for $10. With no campaign or story mode to speak of, you may think it will grow old. But both Classic and Flash modes, online and off will keep you hooked like a drug. And like that very same drug you'll keep coming back for more. (Junkie!)

Overall, Dr. Mario is fun, energetic, and just a little bit brain stimulating. Don't believe me? Maybe your friend will get it, and they can send you the demo (it's possible!)

Multiplayer: 8/10 2-player only for Dr. Mario and no online for Virus Buster is strange. But what multiplayer there is really works. And the online modes are quick and polished.

Graphics: 7/10 Two dimensional but nothing unpleasant to speak of.

8/10
Comments or questions? Drop an email to kylehogg@gmail.com or leave a comment below...
Posted by Kyle at 11:44 PM