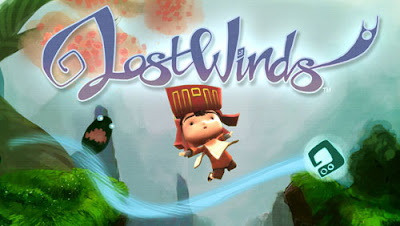 If you follow the internet a lot, like me, you'll find that whenever there's something about WiiWare you'll usually find LostWinds mentioned. When WiiWare was just a month or so away, and someone would ask me what I thought of the service, I'd say something like, "Eh, looks pretty cool, especially that LostWinds game." I was really hyped for this game and being a launch title, I downloaded it the first day. Does it live up to the hype?

First off, LostWinds is a platformer but not a traditional one. The main character you control is named Toku and is actually really weak and useless. All he can do is walk left or right and climb small ledges. And strange enough, he cannot jump... in a platformer. Instead the Wii's cursor controls a little symbol called Enril, a wind spirit. Simply holding A or B and drawing a line in a direction near Toku, summons a gust of wind sending him in the air. It is a brilliant mechanic and works seamlessly with the Wii Remote. This mechanic is used for almost everything in the game. From moving Toku to a higher ledge to solving the various wind-based puzzles in the game.

Later on in the game you get more powerful wind powers, such as the ability to have three gusts of winds before Toku falls down to earth or being able to draw specific paths for Toku to be carried along on. The puzzles in LostWinds may seem easy at first but they do get harder later on. Not the Zelda or Zack & Wiki difficulty, but they'll have you sit there for a few minutes scratching your noggin. While they may lack in difficulty they make up in creativity, such as drawing a path for fire to burn through a wooden barrier or carrying water via wind to grow an essential plant. Since this is an adventure game, you will find puzzles around every corner, and it's pretty rewarding.

The controls work very well, and the game feels like it was meant for the Wii. There's very little you'd have to learn once you get in the game. You control Toku with the Nunchuk. The Z button pulls up plants or has other various purposes. The Wii Remote is only used for controlling the wind. The A and B buttons each have different wind powers. And that is pretty much it. Simple but gets the job done.

While LostWinds excels in gameplay, it also has a surprisingly deep and mythological story to back it up. I won't go into much detail, but it's about some ancient spirits that actually reminds me a bit of Native American lore. The boy in it (Toku) stubbles across a stone that the Wind Spirit, Enril, is trapped in and they begin their journey to defeat the evil spirit, Balasar. It's a cool little part of the game that definitely doesn't detract from it.

The graphics in LostWinds are very nice. Frontier achieves what a lot of developers can't do a regular disc, while they do it on a small 40 megabytes. Everything in the game is vibrant and living. When you move your wind cursor over a tree, it's leaves blow in that direction. Create a gust through a crowd of people? They stumble and grunt. From the texture detail to the lighting, it's just plain impressive. For me, LostWinds is up there with Super Mario Galaxy and Metroid Prime 3: Corruption as being the best visually for the Wii. 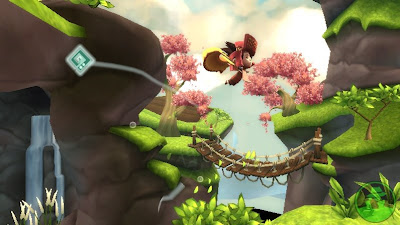 An example of LostWinds' excellent visuals.
To compliment the exceptional graphics, is the beautiful soundtrack. The music fits the game perfectly with ancient Native American flutes and literally flowing music. Right from the moment of clicking on the games channel you get sucked in with such great music. Definitely one of the highest points of the game.

One of my problems with the game is the length. LostWinds will last you anywhere from around two and a half hours to four. The developer's excuse is that a lot of the $50 games out only have a five to ten hours of gameplay. While this may be true, you still want a lot more from it once you've completed the story. Sure, you can go through it and collect all 24 statues which offers some replay value. I beat the game and I had around 13 or 14 statues, so I'll probably be playing it more for those. But still, once you've finished, there's very little that calls you back.

Another issue I had with the game was the difficulty. I think I died maybe a grand total of once during the entire game. Very little of the enemies or dangers present a big enough challenge that you lose a chunk of your life. You have only four segments of life and it stays that way the entire game. If you fall a long ways and gain speed, you'll lose a portion of your life when you hit. But if you slow down Toku's decent by pointing at him and moving back and forth you'll keep yourself from having that problem. The puzzles present a fair amount of challenge, but they're still not that hard. Many of the puzzles are repeated (such as the fire one), and you'll quickly learn how to come around a lot of them. It is easy, but I don't think an expert difficulty is especially needed for a game like LostWinds. It could use some upping in the difficulty area, but it's fine the way it is.

Overall, I think LostWinds is the best you can get from Nintendo's WiiWare service. It's entertaining and keep you hooked until the credits. It's short, but the graphics and audio really keep the game moving.

Gameplay: 9.5/10 Very fun and the wind mechanics are rewarding. The controls are simple and keep the game going.

Graphics: 9.5/10 Very nice and some of the best one the Wii, you won't be dissatisfied.

Sound: 9/10 A compelling soundtrack flows through the game like the wind you control.

Lasting Value: 3.5/10 Four hours at most and that's still very short. I really wish there was more to this game.

9/10
If you're only buying one downloadable game this year, LostWinds should be the one. If you don't believe me then look at the graphics, entertainment, and awesome soundtrack. You won't be disappointed in your decision.
Posted by Kyle at 3:00 PM