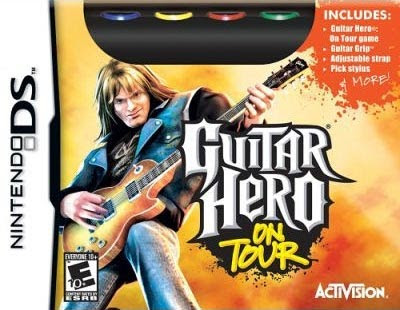 Guitar Hero on the DS... Not the system you'd really imagine the popular series to jump to, but guess what? It happened, and it works!

While there's been a lot of changes to the game to make it work on the DS, it still feels like a Guitar Hero at heart. Which is the most important thing.

The most noticeable change is the lack of a guitar peripheral. Instead you get a Guitar Grip, a neat little device that plugs into the GBA slot of your DS (as pictured below...). You'll notice that instead of the five button layout of the console versions, Guitar Hero: On Tour eliminates the fifth, orange button. A good choice in my opinion, as the game would feel clunkier if you had to slide your hand up and down. And if you're worrying about the difficulty due to the lack of a button, don't; the game really challenges you in the Hard and Expert difficulties (especially those last couple of tiers). 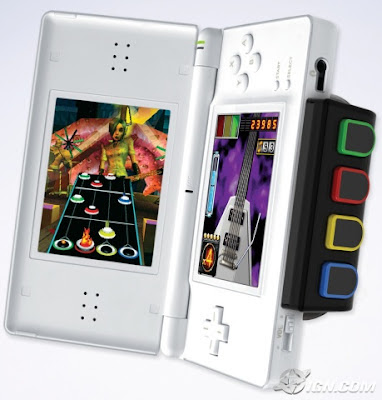 As for the peripheral, it works pretty well. The buttons all feel nice, which is good. I do have some gripes with it though. But it does feel a little loose in the GBA slot. Everytime I'd slide my hand in, it get disconnected. So here's tip: put your hand in the Grip before you turn your DS on. It'll save you a lot of connectivity problems. Another thing I should mention is after long periods of play, you'll most definitely get hand cramps. I don't really see how they could've prevented this with the Guitar Grip, but just remember to take breaks and stretch out your hand every once in a while. Overall the Grip feels pretty good and works pretty well. If only they'd made it a little more secure in the GBA slot.

Now you may be wondering how it all plays. You hold the DS like a book (à la Brain Age, Ninja Gaiden Dragon Sword, etc.) On the left screen are the scrolling gems above your selected character playing at selected stage. On the right (touch) screen shows your score, how much Star Power you have, how well the crowd likes you, and the strings of the guitar. Instead of a plastic strum bar like the console versions, the game comes with a stylus pick. So when you're pressing the corresponding color button, you strum across the touch screen with your pick to play the note. It works surprisingly well. Plus you can strum anywhere on the screen in any direction to play a note. The Whammy Bar is used by moving the pick back and forth across the screen without picking it up.

In the console version of Guitar Hero, you activate Star Power by tipping the guitar controller vertically and your multiplier would double. This is another area where Vicarious Visions has succeed in bring Guitar Hero to the DS. To activate it all you need to do is blow or shout some word into the DS's built in microphone (I found "Wha-hoo!" to work well). If you're playing in a loud room or in a vehicle, you may find that it activates itself on its own. This annoyed me a bit, but I couldn't see what they could've done to decrease it, as if you play in a quiet atmosphere, you may find yourself rather loud. But if you want to keep quiet, you can also activate it by pressing one of the DS's face buttons, which is nice. 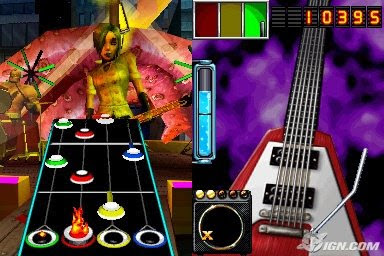 The song selection is an interesting one. It focuses more on mainstream and recent rock, as is evident in songs like blink-182's "All the Small Things" and "What I Want" from Daughtry (which interestingly features Slash). While some classic rock songs appear, most of them have been seen on previous Guitar Hero (such as "Hit Me with Your Best Shot", "Black Magic Woman", and "Rock and Roll All Nite"). While I enjoyed the songs, I didn't so as much as previous games. But hey that's me. The song list will appeal to different people, and some people may not even buy the game because of the list. All in all, there's 26 songs in the game (only one of those is unlockable). It may seem small compared to other Guitar Hero's, but it's on the DS, so it's pretty incredible that they could fit that many on the little DS cartridge.

Guitar Hero: On Tour also improved some areas of gameplay that definitely need to be brought over into the next versions (console and handheld). The first of these is the pause game scenario. In Guitar Hero III if you'd pause the game and then resume, more often than not you'd miss the next couple notes, as it starts off right where you paused. In On Tour, it rewinds the song a bit but doesn't have any notes for the first five seconds so you can catch back up with the song. An excellent gameplay aspect in my opinion, and something they definitely need to used in the console versions.

The second area in which I feel they improve on 100% is the boss battles. I hated the Boss Battle and Battle modes of Guitar Hero III. They were horrible in my opinion. Well Guitar Hero: On Tour returns to them but improves on every gripe I had with GH3's. First off, in Legends of Rock, to win a battle you had to make crowd boo them off the stage, which was pretty hard to do especially in multiplayer (in which things often ended in a tie). In On Tour, all you need to do to win is get a higher score than your opponent. The other problem I had with GH3's battle mode were the unimaginative powerups. With the DS's touch screen and microphone Vicarious Vision's can do so much more. On of my favorites was one that made you sign a fan's t-shirt, purse, or fish to get back playing. Other creative items include blowing out a fire through the microphone and reconnecting guitar strings via the touch screen. Another great choice was making the battles separate. Instead of having to beat a battle to get to the next bunch of songs, it's in a whole other mode titled Guitar Duels.

There's multiplayer too, which includes both co-op and competitive play. In cooperative, one person plays lead, the other back-up. But it seems like competitive is where it's at: as you play the full Guitar Duels with friends!

The grachics are actually pretty nice for the DS. They still have that GH feel, but a bit smaller. If you go into detail, you'll notice that the singer and bass guitarist have been combined into one person. But overall they're above average for Nintendo's little handheld.

Vicarious Visions succeeded in bringing over the popular franchise to the DS. You'll definitely be entertained with this version. While the song selection includes some pretty cool tracks, it won't appeal to everyone.

Gameplay: 9/10 Not so much like playing a real guitar, but quite a bit like playing Guitar Hero. And it's a great deal of fun.

Multiplayer: 8/10 Guitar Duels are great in single-player and even better with a friend.

Graphics: 9/10 Some very nice visuals for the DS. The two screen layout works well too.

Sound: 8/10 Some pretty nice tunes. About half of them are master tracks.

Lasting Value: 7.5/10 The 25 tunes (plus one unlockable) will keep you occupied for only so long. The Guitar Duels are a nice addition too.

8/10
Comments or questions? Drop an email to kylehogg@gmail.com or leave a comment below...
Posted by Kyle at 3:55 PM