Originally I was going to write a Boom Blox review, but I decided I hadn't played enough of it. So I'll review my other recently purchased game: Gyrostarr. Enjoy! 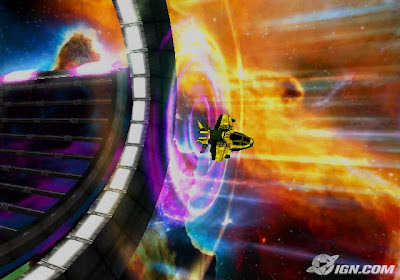 Lately there has been a lot of hype and attention towards High Voltage Software's first-person shooter, The Conduit. So a couple of days after the Conduit was announced, Gyrostarr was to. People started to get really excited about High Voltage and what they were doing with the Wii. Now that Gyrostarr's here, with an interesting price tag of 700 Wii Points, what do I think of it?

Gyrostarr is a Shoot 'Em Up, or SHMUP for short. Games in this sort of genre are filled with hordes of enemies, usually spaceships or other vehicles, and tons of power-ups. Gyrostarr embraces all of these common features. And it adds some unique and cool ones of its own.

First off, you control your little ship in several different ways. The first and easiest (for me) is holding the Wii remote classic, NES style (sideways). The D-Pad controls your ship, 2 for shooting, and 1 for nukes. Simple and effective. Then there's the motions controls, which don't work so well. It's very easy to oversteer and bump into the sides of the level. Nunchuk control and Classic Controller are available too, but I didn't really try out the two. The sideways Wii remote works very nice for me and is the way to go.

The premise of the game is that you're hurtling down these "twisting, turning techno-plasma canal(s) in space." While there's no background as to who you are or why you're doing it, it definitely makes a stylized, speedy shooter. There are half a dozen or so different enemies that you'll face as you fly down these tracks. There's the basic ones that take a hit or two to kill. Then there's those that don't shoot at all but block you unless you shoot them down. Next there's ones that explode and ones that hold tinier ones. There is some variety, but I could use a bit more.

Now for the other aspect common to shooters: power-ups! Gyrostarr has quite a few. They include everything from Triple Shot and Invincibility to Slow Enemies and Fast Shot. Another is the Nuke that will destroy all enemies on the screen. But you'll get an added bonus at the end of each stage if you don't have to use any Nukes. These objects really make the gameplay less stale.

While Gyrostarr has a lot SHMUP basics like power-ups and enemies, it also has some new concepts of it's own. Instead of merely surviving until the end of the stage, you have another goal too. White, floating balls of energy will pass along with enemies and power-ups. You must collect enough of the energy to fill up a bar (in the uppermost section of the screen) before you reach the end of the canal. It's really adds an element other than surviving to the game. The other aspect that Gyrostarr has is the grappling hook. Instead of just touching the power-ups or energy orbs (which you can do), you can also send out a grappling hook to grasp on and pull energy and power-ups to you. It works well and is a nice touch. 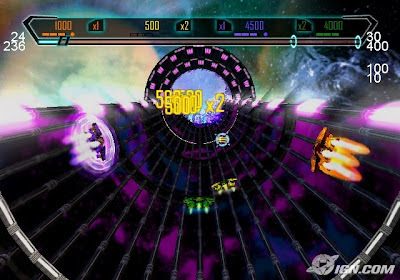 Gyrostarr's gameplay.
As for the difficulty, it somewhat lacks in this area. The first five levels are so slow, I'll be surprised if you lose a life. Currently I'm at level 15 or so and it's started to pick up. But still I have barely failed a level yet. With no options for difficulty, I feel High Voltage clearly missed the boat here.

The multiplayer in Gyrostarr is really unique. It blends cooperative with competitive. While you and up to three other players are all working to get enough energy to open the portal at the end. You can also choose to screw the other person up by taking the power-ups and shooting more enemies. At the end of each stage points are given, and it's here than the competitive edge really takes off. To make things balanced, whenever you obtain a power-up or energy orb, you're sent to the back of the order of ships. It keeps the gameplay even and works fine.

The graphics are average for a Wii game. It's nothing we saw in that tech demo of High Voltage's engine, Quantam 3. The techno feel of the game is cool. And the space backgrounds are actually pretty stunning. But as far as effects and the ships/enemies, it's nothing extraorinary.

Gyrostarr has only five or so different tracks that it play through out the game. But they're actually pretty cool. It's all techno, and it really blends with the game. But once again, it's very limited.

With 50 different levels, the game boasts a surprisingly large amount of stages. But while this is a lot for a shooter, it doesn't really do anything in these levels except up the difficulty and add more enemies. It would have really been cool to see some variation, such as boss battles or objective based missions (like survive with one life or use only your regular shot). High Voltage could have done so much more with this, but it will last you a while if you want to complete the game fully.

Overall, the game's actually pretty entertaining, but it's still an average title in all aspects. I'm still waiting for The Conduit to say whether or not the High Voltage is an extraordinary publisher. A decent one? Yes. Exceptional? Not quite yet.

Gameplay: 8/10 It embraces both the old and the new: from enemies and powers to the grappling hook and the energy meter (respectively). Fun while it lasts.

Multiplayer: 8/10 Unique and quite some fun. Combining cooperative with competive is where the multilayer shines.

Graphics: 7/10 Average, but the outer space backgrounds are pretty sweet.

Sound: 7/10 What's there is some pretty cool techno, but not there is variety in the soundtrack.

Lasting Value: 7.5/10 With 50 levels, it may seem quite a deal. But there's not much more in each of the stages besides increased difficulty.

7/10
Comments or questions? Drop an email to kylehogg@gmail.com or leave a comment below...
Posted by Kyle at 3:00 PM