So many games, so little money

Extremely short article this time around. Don't worry though, I have several larger post ideas that hopefully can all be made into reality.

I've become to realize something over the past few days: there are a lot of great Wii games coming out. Maybe a couple aren't up the the caliber of "hardcore" as MadWorld and The House of the Dead: Overkill, but there are some quality games releasing in the coming months. 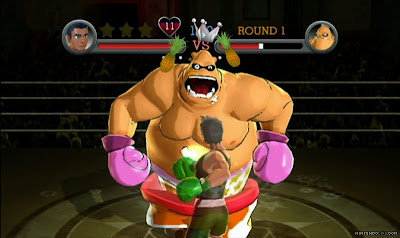 Socking King Hippo in the stomach, just one of many great experiences to be had this May!
I haven't even picked up the surprisingly awesome looking Excitebots: Trick Racing. Then there's Punch-Out!!, the Boom Blox sequel, and Klonoa coming out this May. That's not even mentioning New Play Control! versions of Donkey Kong: Jungle Beat (due out in May as well) and Pikmin 2 (no solid release date for North America, but it'll most likely be here sooner than later since Europe's already gotten it). Some of the listed Wii games may not be everyone's cup of tea, but there's no denying May is hope to quality releases. But even in the months following May we'll see the releases of huge titles like The Conduit and Wii Sports Resort, not to mention Little King's Story.

That's a total of nine games I'm really looking forward to. And that's nine reasons I'm very happy to be a Wii owner. But what I'm not happy about is having to spend money on all nine of these games! With this school year nearing it's end (it can't come soon enough!) I'll have to start looking for a summer job to pay for all these. Because I certainly don't want to miss out on some great Wii fun. How about you? Are you loving the support the Wii's getting? Is your wallet hurting as well?