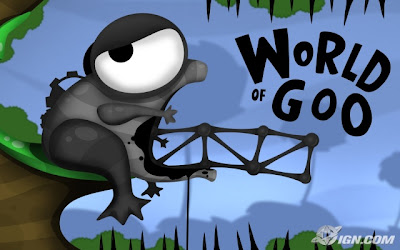 World of Goo is one of those games that's great for services like WiiWare, XBLA, and PSN. It was made by a two man team (later three, but mainly two people worked on it). It's a simple, compelling concept that can be priced lower than retail games for the sake of download. But is it all that great? I'll break it to you know, the answer is "YES!", but read on to find out exactly why...

Each level has you picking up various balls of goo, connecting them to each other, and constructing large structures. You must build these towers/bridges/etc. towards a pipe located somewhere in the level. The goal is to have a certain amount of goo left over to beat the level. It's a really cool idea that started as a simple physics simulation titled Tower of Goo (which is actually featured as a level somewhere in the game). 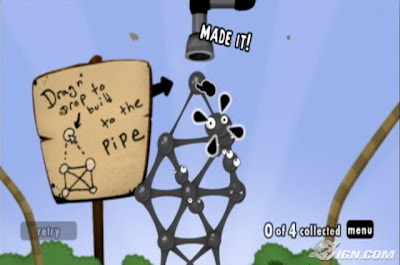 Besides the basic concept, there are quite a few things to mix of the gameplay so that each level feels fresh and new. Other than the basic, dark-gray goo that is used to build solid structures, there are a variety of goo types to use. For example there's the green goo which can be reused by detaching it whenever you need more. There are also goo that can stick to things, that can't be destroyed, that inflates into balloons, and that can be lit on fire (usually to ignite something).

Each level will have obstacles in the way and not to mention gravity. The physics in the game are pretty good and you'll find that you need to balance out towers and build supports on bridges to be successful. It may be frustrating at times, nothing really beats the thrill of your tower started to tip, only to have you even out the goo and save it. Other than gravity a variety of spikes, fire, and rotating gears will ensure the road to the finish is challenging.

You'll be amazed at how much fun the game is. And for good reason, each level will delight, amaze, and challenge you. Plus almost nothing is done twice, and if it is, there's still so much fun to be had. The level design is top-notch. You'll be building a simple tower up the the pipe way up at the top, hoping to god your tower doesn't tip in one level and in the next you'll be building a bridge over to the other side, attaching balloons along the way. Some of the stages are super-wacky and have you almost think abstract. The gameplay in World of Goo is some of the best fun I've had in a while.

The difficulty is pretty nice in the game. It's starts out fairly easy and with each level it gets a bit more challenging. The last three levels of the last world are super hard and I still haven't beaten them myself. 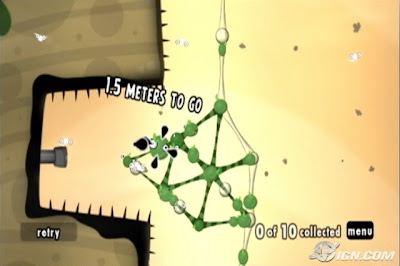 I can barely find anything wrong with World of Goo, it's just a great game. But there are several things I do need to mention. First off when playing with separate goo types, it's hard to pick a certain one. The only way to have done this easier would be to assign different goo balls to different buttons but it'd make the game more cluttered and complicated. Also with the green goos, which could be taken off of existing structures and reused, I found that sometimes when trying to pick an unused goo ball, I'd of pull one already solid and the structure would crumble. And finally, though it's more a matter of what isn't there than what is, where's the level editor? The PC version gets it, why not us WiiWare people? The game would be perfect for one and 2D Boy really missed that one.

The story of World of Goo really needs to be mentioned. It's wacky and creative. I won't ruin anything for you, but expect some little twists and turns involving the "goo balls" and their quest to find a greater meaning of their life. The signs that litter different levels from "the Sign Painter" are both humorous and philosophical, plus they expand the story a bit too.

World of Goo is a fairly long game; I clocked around seven to ten hours in the game. A notable feature is the ability to skip levels and come back to them later. A feature I used on occasion. The game is broken into four worlds and an epilogue. Each world has around ten or so levels in it (and four levels in the epilogue). In each level there is also a higher goal titled OCD that will bring back the hardcore fans. These require something like 40 goo balls or to complete the level in 10 moves. 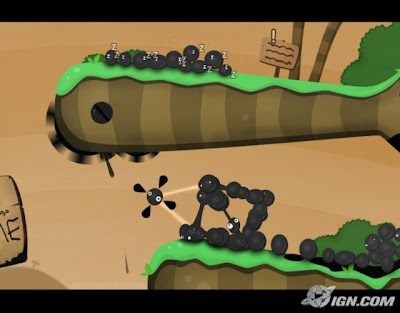 Other than the basic game, there is a metagame called World of Goo Corporation. All the extra goo you collect goes here. With that goo you try to build the biggest tower. It's somewhat like a game that's also a leaderboard. Once you get high enough, clouds will appear. In them are stats of other players with towers similar in height to yours. The clouds tell you what country the people are from and how many goo balls they used to build their tower. It's a cool little distraction within the overall game.

World of Goo's style is exceptional. The crisp, colorful graphics are great. The almost Dr. Seuss style works very well with the game. The music is also notable. It's funky in some levels and serene and beautiful in the next. Definitely don't put your TV on Mute while playing this WiiWare game.

EDIT: As a reader mentioned to me, the style is more Tim Burton that Dr. Seuss, though there'sa bit of Seuss's style in there too. Thought I'd make that clear.
Overall Thoughts
World of Goo is one of the best games I've played this year and a great WiiWare title overall. With enough content and fun to be priced as a full retail (or slightly lower), World of Goo is a must-have. It tops downloadable favorites of mine in both style and presentation. Though it has very minor flaws, the $15 game is well worth the Wii Points.

10/10
Comments or questions? Drop an email to kylehogg@gmail.com or leave a comment below... Still can't decide whether or not to purchase it... (though as I've said, the answer is yes) check out 2D Boy's PC demo here.
Posted by Kyle at 11:15 PM