Top 9 - Features of the DSi 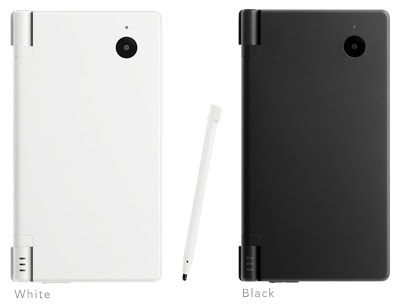 Why Top 9? Because I feel Top 5, Top 10, and even Top 100 lists are way to overused. What better way to break that trend than to compile a list of 9 things? Today's topic is the DSi. The DSi was recently announced at Nintendo's Fall Media Summit. And the internet is abuzz with facts and pictures of Nintendo's newest handheld. Though not a whole new handheld, it adds so much more than you'd expect from your typical redesign. Today, I've made a list of the top nine most prominent features of the new DS redesign, the DSi.

9. Miis
Though it may be minor, the fact that you'll now be able to have your Nintendo avatars on your DS is pretty cool. The first game/application that will utilize this is the Lifestyle Rhythm Calculator software in Japan, I don't know if that's coming here yet.

8. New games
New games are a given of course. But not only new games but new innovation in games. Think of what the camera can do in a game (discussed later). Even without new features, there were a few launch titles announced for the DSi. The biggest being Mario & Luigi RPG 3.

7. Onboard memory
The flash memory is probably going to be used mostly for the DSWare games (again discussed later), but it might also be utilized in some games, you never know.

5. SD card slot
Probably will be used for saving data once the onboard memory is full. Also to send photos over to computer and Wii (wait a camera? what? ...discussed later).

4. Bigger screens
The DSi will have 3.25 inch screens versus the DS's 3 inch screens. It's supposed to have a little bit better resolution too.

3. The web browser
The original internet browser you could buy for the DS. I've never used it before and heard it kind of sucked. Plus it was discontinued in the U.S. But the new DSi has a built in web browser that uses the same internet browser, Opera, as the Wii's one. The Wii's Internet Channel works pretty good in my opinion (could use some tabs) so hopefully this will turn out good too.

2. DSWare/Apps store
Similar to WiiWare, DSWare will allow smaller games and more indie titles to reach the audiences. The prices range from free, 200, 400, and 800 points. A lot of the apps could be like the iPhone's (MySpace, weather, etc.), but I also hope Nintendo releases Game Boy, Game Boy Color, and GBA games for downloads, especially seeing that there's no GBA slot.

1. Build-in camera
The single biggest change of the DSi is the camera. Some sites claim its a 3 megapixel, while most others say it's a 0.3 megapixel. If it's the latter then that's not that high of quality. Even so, the possibilities the DSi opens up with a camera are pretty big. You'll be able to directly send the photos you snap over to your Wii's Photo Channel. There's also a built in editor on the DSi similar to the Wii's (in the Photo Channel).

All in all, the DSi brought quite a few changes. Though some may complain about the lack of GBA backward compatibility, the newer innovations, particularly the camera, DSWare, and the bigger screen and speakers, make it worth it.
Posted by Kyle at 4:07 PM