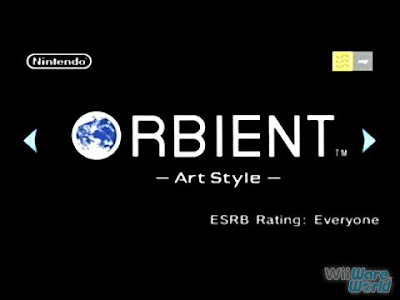 A little history lesson before we start. The bit Generations titles were released for the GBA in Japan to compliment the Touch! Generations titles on the Nitendo DS. The titles were meant to feel retro despite all being new game concepts. One such titles was Orbital, which has now been put on Nintendo's WiiWare service for download. Should it have stayed a portable, Japanese only game? Or is it worth the few bucks it's priced at?

The entire concept of ORBIENT is that you're this little tiny star. Your goal is to absorb other stars that are the same size as you to get bigger. You control a while star. Stars that can be absorbed by yours are blue. Once you absorb a blue star you become bigger, making previous blue stars now gray, and bigger (previously red) stars now blue and obtainable. The goal of each level is to grow your star big enough to get the goal star in your orbit. How do you do this? Let me explain. Probably the coolest aspect of Art Style: ORBIENT is gravity. Each star has it's own gravitational pull. Logically, the bigger stars have more gravitational pull. And if you enter the orbit of a larger, red star, after a short time, you'll begin orbiting it. Once you become big enough, you can be pull other, smaller stars into your orbit to become satellites. It's a really simple concept that is used ingeniously. 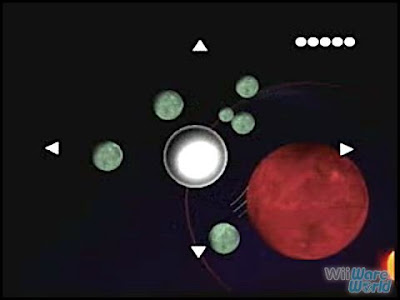 The controls of ORBIENT are about as simple as it gets. A is to activate gravity, pulling you towards stars. On the other hand, B is to use anti-gravity, pushing you away from the stars. No D-pad or analog stick involved. It may sound like too little, but you'll be surprised at how much control you do have over your little star. But later in the game it does get tricky. If you don't use just the right amount of gravity and anti-gravity, you'll find your self hopelessly flying towards a giant, red star taking away some of that precious life.

But it's not all fun and games. You start out with five lives. They can be taken away one at a time by colliding with larger stars. You get more lives by completing stages and obtaining satellites. Other than the basic big, red star, there are certain obstacles in the game that'll make it difficult to get that goal star. One of them, and probably the most impressive, is the black hole. These dangers have their own gravitational pull, pulling your star towards it all the time. But they also have their own anti-gravity to use too. But if you do happen to get sucked into the black hole, it's game over for you, as it takes away all your lives. Asteroids are the other hazard, and they're a bit harder to get around. Sometimes they're orbiting stars, other times they're locked in place. Asteroids have no gravity, so you'll have to use the pull of other stars to get around them. 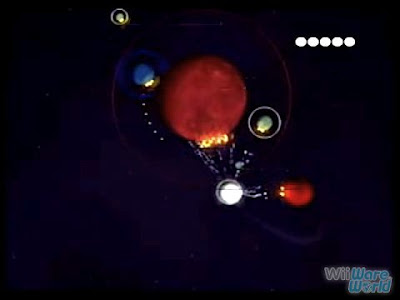 The game is a really, really basic concept. I mean how deep can you get with only two buttons. But there really is a lot of fun to be had with this game. The game gets really difficult in the later levels. I threw my controller down more than once while playing. But another great thing to do, is just play the first few levels or so. Orbiting planets, growing in size, and gaining satellites of your own can be a very relaxing experience. That being said, don't expect to beat this game easily. It's a tough one.

There are only very minor things I saw wrong with Art Style: ORBIENT. The first of which is that I felt the game was a bit too simple and could have introduced a few new mechanics or hazards along the way. The other problem I had with the game was the ramping up of difficulty. The first five or so levels are pretty easy and you'll fly by them. But then the game gets very hard, very fast. I would've liked a little bit more easing up into those later stages, but oh well. The game sports some fine gameplay nonetheless. 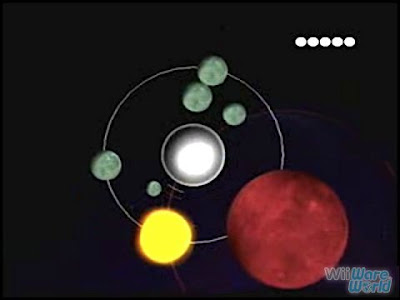 As for the presentation side of things, ORBIENT is basic here too. The graphics are nothing to gawk over, but the calming look and strange, outer space backgrounds go with the game well. Music is pretty much nonexistent. What is there though actually amazes me. The sounds change over time. When you collect satellites, a little tune starts to play. When you've collected enough satellites, another, different tune plays. And when fall into the orbit of a large, red star some more musics plays. It's great and melds with the gameplay perfectly.

As for longevity, the game will last you a while, especially with the increasingly difficult levels. There are 50 levels in all, spanning over 6 galaxies. Each level can take anywhere form ten to fifteen minutes, without dying. But you'll probably spend a lot more time on those levels...
Overall Thoughts

Art Style: ORBIENT is a simple title that uses it's core concept, gravity, and really expands on it. It's a unique little game overall. The graphics may not break any records, but the strangely enjoyable music and lasting value will make this a definite must to most. Plus with the $6.00 price tag, I'd recommend ORBIENT to almost anyone.

Gameplay: 8.5/10 Using only two buttons, you must navigate your star through a level. It's super simple but super entertaining.

Graphics: 7/10 The plain visuals won't be eye candy. But at least they don't hurt your eyes. Plus, the backgrounds are nicely made.

Sound: 8/10 There isn't much to the music. But once you get going, you'll notice subtle changes when you do certain things. It's really neat and you need to experience it to know exactly what I'm talking about.

8/10
Comments or questions? Drop an email to kylehogg@gmail.com or leave a comment below...
Posted by Kyle at 11:19 PM